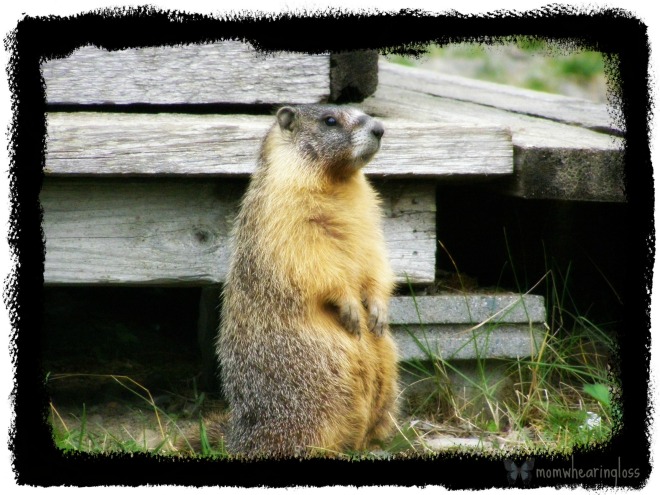 They say it’s spring, but I’m not feeling it.  Maybe this little guy feels it!

“It is the hour to rend thy chains, 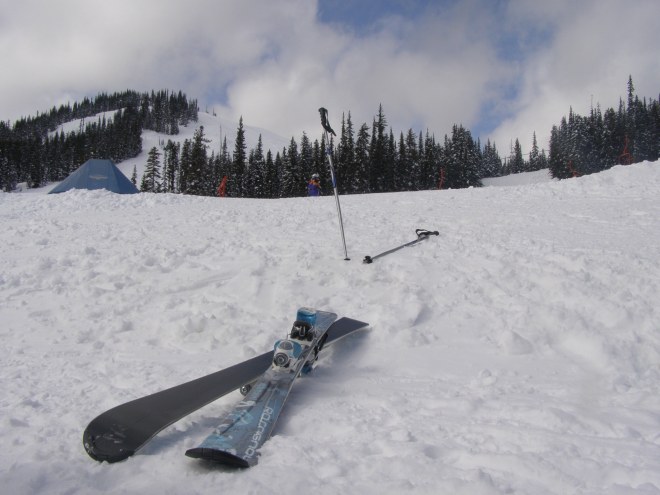 During the Olympics I was intrigued by the Latvia hockey team as they came out of nowhere and gave the Canadians a run for their money. I couldn’t help but notice the haunting image painted on the mask of Latvia’s goalie. I did a little research of my own and found out that the image represented Latvia’s freedom statue and the many men who died for Latvia’s freedom. It was the only image Latvia’s goalie wanted on his mask. Obviously proud of their freedom and fiercely determined to remain free. I don’t reblog often but I love these pictures and I find Latvia’s history interesting.

I haven’t had split pea soup since my mother made it while we lived in Quebec – have to give this a try – courtesy of  P.E.A.C.E

Makes 6 generous servings (or lots to freeze) and is ready in about an hour.

Place bacon in a large soup pot over a medium high heat. When the bacon is brown and crispy drain away the fat, leaving about 2 Tbsp in the pot (alternately, first cook veg in a bit of EVOO and add thawed cooked ham when adding dried peas, stock and seasonings). Add onion, carrots, celery and garlic to the pot and sauté for a few minutes. Add the dried peas, stock, bay leaves, rosemary and salt and pepper. Bring to a simmer and continue cooking until the soup is thick and the peas are completely soft. Stir in frozen peas and stir to heat through. Stir in the vinegar and add salt and pepper to taste. (recipe source) Gina’s Note: The bright pop of flavor from the fresh/frozen green peas adds a real freshness and depth to this dish, and the vinegar (I use red wine vinegar) simply highlights all the flavours already there. You won’t actually taste vinegar, it’s simply doing its magic of heightening flavors. 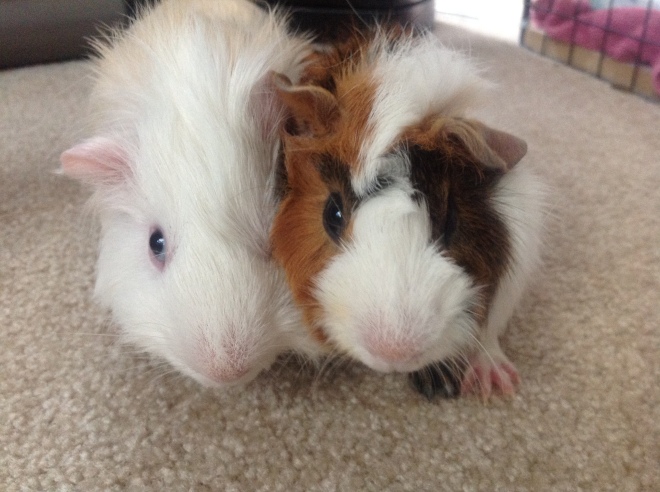 We bought these two cuties a few years ago – unfortunately the white one died.  I’ve never owned a guinea pig before and wasn’t all that excited to own one.  There is more to these little rodents than meets the eye.  They are cute, loveable, smart, loyal and fun.  Listed below are a few things I’ve learned from our guinea pigs by watching their behaviour.   I’m not exaggerating  about the behaviour – they have exhibited all of these behaviours.

I took this picture in Manning Park.  We were camping in the park and walking to our fishing hole.  As we came around a corner we were faced with a sea of daisies.  The boys and Drew walked straight to the edge of the lake and started fishing without much fanfare.   I walked through the field of daisies and took pictures for an hour.  Men just don’t appreciate some of the finer things in life!

In light of Russia walking in and taking over the Ukraine and all the other places in the world where war is constant, we here in North America take for granted that our children can go to bed in peace and walk the streets without  fear of bombs,violence and bloodshed.  This blog is dedicated to moments that make me smile but I, as a mother, can’t be ignorant of what so many children in the world go through and pretend that because my children  are presently safe that this is okay.  Watch and share because it’s important that all children of this world live in peace.

It’s been a while since I’ve thought about Ron, but for some reason I’ve been thinking about my dear friend quite a bit lately.  The friendship that Ron and I shared was unlikely.  Ron was twice my age, married with teenage children, he was from a foreign country and wise beyond my years.  I was a single young woman, working to pay my keep and essentially had no responsibilities except what I was going to eat that day and meeting my friends for movies, dinner and whatever my heart desired.  When I first started working at the school I’m still employed with, I started out as the receptionist and Ron walked into the office to pick up a car for one of our staff members.  Ron had two girls attending the school and he was a mechanic with his own shop.  All the staff members went to him with their automobile mechanical problems.  He fixed everyone’s car.  I would see him at least three mornings a week as he dropped his girls off at the school and picked-up someone’s car to fix.  I was driving an old Datsun 210 at the time and I asked him if he would tune up my car. Always obliging and sporting a beautiful smile, he took my car for a tune-up and the friendship began.

After his girls graduated from the school he would ask me to pick him up in the mornings to drive him to the school so he could pickup staff members  cars and then I would drive him home at the end of the day.  This commute several times a week led to many great conversations, which led to dinner invitations to him, his wife and two girls to my mother’s place where all of us would laugh and talk for hours.  Ron was from Trinidad and he talked faster than I could listen at times but he always made me laugh.  When he left Trinidad he went to England and it was England where he told me of his first experience with snow.  He said he was walking down the street and all of a sudden this white stuff was coming down from the sky and as he looked up to the sky, he saw big flakes and he caught his breath as the snow landed on the skin of his cheeks and then melted seconds later from the sheer heat of his body.   He stood in the middle of the street with his hands and his tongue out to catch the most glorious feeling he had ever felt.  He said he was giddy as he was running from one side of the street to the other.  I could picture him with his big boyish grin running from one side of the street to the other laughing as he caught the glorious snowflakes with his tongue.

Ron was such a bright light, a light filled with wonderment and joy.  To this day I’ve never met a spirit like him, he was a joy to be around.  The cultural difference between us was never mentioned and I never really thought about it until one morning on the way to work, he mentioned that his daughter had applied for a job and that she didn’t get it.  He was disappointed and he felt she didn’t get the job because she was black!  I was shocked because Ron never pulled that card before and being me I told him that I was surprised to hear him say that and did he really believe that she didn’t get the job because of the colour of her skin.  He said “of course it’s true Johanne, you wouldn’t understand.”  I asked a few more questions about the job she was applying for and it became very obvious that she was not qualified for the job and I mentioned it to him.  I said “Ron it doesn’t sound like your daughter had the qualifications for this particular job, I bet that has more to do with it than the colour of her skin.”  Ron mumbled a bit and said “no it’s because she’s black.”  I said “come on Ron you don’t really believe that, there are times when minorities get the job because of their minority.”  “I really think she didn’t get the job because she’s not qualified, end of story.”  The rest of the car ride was very quiet and I felt like I had spoken out of turn and lost a friendship, after all what did I know about this subject, I am very white and never really thought about what it’s like to be a different colour, a minority.   I don’t have that kind of history and I couldn’t help but think how arrogant I sounded.  However, after asking Ron a few questions about the job his daughter was applying for I really didn’t think she was qualified for the job and I would like to believe that’s why she didn’t get it.

We left the conversation in the car that day and never re-visited the subject and I’m glad to say that our friendship didn’t suffer.  One day while Ron was waiting for a staff member’s car, our office manager was talking to him.  The two of them had a great sense of humour and they use to carry on and make us all laugh.  This particular day there was a five-year old boy sitting in our office area waiting for his mommy as she was seeing one of her older son’s teachers.  This little boy was watching Ron and the office manager as they joked away and all of a sudden he got off of his chair and walked over to the two of them and loudly exclaimed,  “are you two brother and sister?”  Everyone stopped dead to stare at this little boy as Ron was a Trinidadian and the office manager was this short little red-haired greek beauty, painfully obvious that they were not brother or sister, yet this little boy wanted to know if they were related.  Finally after a few seconds of silence, Ron said “do you see any difference between us sweety.”  The little boy stared for a a few minutes and then he crossed his arms and stared some more and finally he said “yes I do see a difference, your hair is a different colour.”  That’s the world we should all live in, that little five-year old’s world, a world where we don’t see colour of skin, a world where we only see spirits and the light shining between them.

Ron continued to be one of my best friends for many years.  His daughters did a reading at my wedding and my husband often laughs when remembers the first time  he met Ron.  My husband and I were engaged and when Drew met my brothers – both of them said to him “are you sure you know what you’re getting into?”  Yet when Drew met Ron, he said to Drew, “you better be good to that girl or you’re going to have to answer to me buddy.”  Ron’s light went out several years ago. He was diagnosed with a brain tumour and only lasted  a few weeks.  I miss our friendship but it was one of those friendships that came into my life for a lifetime not a season, he was the real deal friend.  A friendship that enriched my life and there were no strings attached.  A friendship that came about despite age, culture and family differences.  A friendship for a lifetime and beyond.