These are really good.  Every time I mention fish tacos, my husband turns his nose up at me.  I changed his mind about fish tacos with this recipe, just like I convinced him camping really is a vacation.   He’ll really feel on vacation when I make these goodies on our camping trip this summer!  This recipe is courtesy of Michael Smith’s “Real Food, Real Good.”

Start with the slaw.  In a large bowl or resealable container, whisk together the honey, vinegar, mustard, cumin seeds and salt.  Add the cabbage and carrots, mix well.  You can rest the works in the refrigerator for a day or two if you like.

Next:  Make the chimichurri.  In a food processor or blender, blend the parsley, cilantro, garlic, jalapeño, olive oil lime zest and juice and salt until smooth.  Reserve in a small jar for a day or two if needed.

When it’s time to pan-fry the fish, preheat your over to 200 F(100 C).  In a shallow dish whisk together the flour, chilli powder, salt and cayenne.  Place your favourite heavy skillet over medium-high heat.  Pour the oil.  working in batches so you don’t crowd the pan, dip and dredge each piece of fish in the seasoned flour, evenly coating it on both sides.  Knock off any excess and carefully slide into the hot fat.  Cook, flipping once until the fish is lightly browned and cooked through, about 2 to 3 minutes per side.  Keep the first batches warm in the oven while you cook the remaining fish.

Build the tacos.  Cut the fish fillet in half crosswise.  Lay a tortilla flat on a clean work surface. Place half a fish fillet in the middle, top with a big scoop of slaw and a generous spoonful of chimichurri.  Garnish with a sprig or two of cilantro.  Fold and serve immediately…delicious..  Makes 12 small tacos with some leftovers, serves 4 to 6. 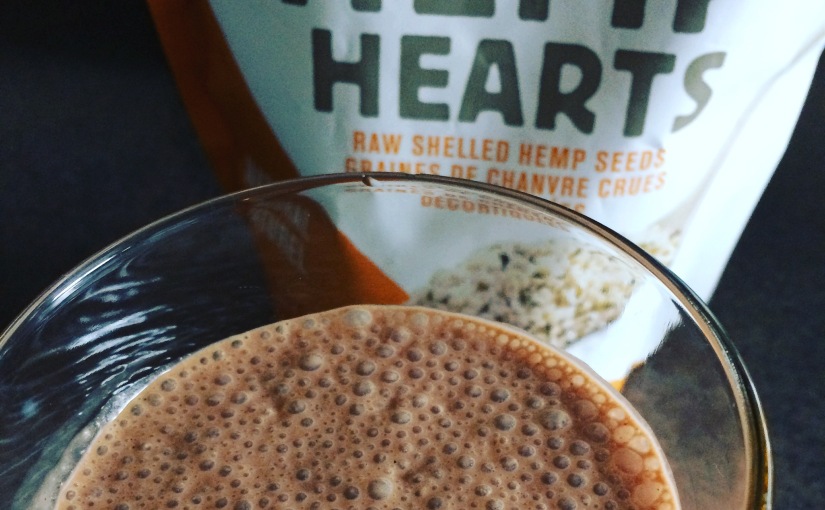 This shake is delicious and answers the call for chocolate!  Loaded with protein, omega 3 fatty acids and antioxidants.  Recipe from “Oh She Glows Every Day.”  You can find out more about the Author, Angela Liddon, at “Oh She Glows blog.”

3 or 4 pitted medjool dates to taste

Blend in a high speed blender until super smooth and enjoy….

“Whoever said that diamonds are a girl’s best friend, never owned a dog.”

Stepping out into the blackness of the early morning,  I inhaled deeply before I took the first step of my run picking up speed and setting my pace.  I felt anxious that morning, the sky had an eerie sense to it and the light mist of fog strained my vision throwing off my senses leaving me with a feeling of vulnerability I couldn’t shake.  I was in my early twenties and I had a few years of running under my belt.  My motivation for running wasn’t for inspiring athletic aspirations, shaping my body or improving my cardio.  The motivation was far more sinister, I was running from an addiction and demons in my head.  The strategy of running to beat the addiction and demons worked; running became my salvation clearing my head, strengthening my soul and kicking the urge to smoke.

I hit the streets every morning between five and five-thirty.  My mother hated it because in the winter I was running in the dark and I could hear her words in my head warning me about the dangers of being a woman running through the dark streets.  My middle name is stubborn and I refused to let fear stop me from doing something that I loved.  However, that particular morning I felt uneasy as there had been two murders a few weeks back not far from where I lived.  One woman was going to work in the early morning and the other woman was out for a walk at first night fall.  Both dragged into remote areas, both raped and murdered.  Of course my mother reminded me of the incidents every day and wanted me to stop running, I told her I wouldn’t stop running as that would make me a victim of a rapist I didn’t know and I told her that “I refuse to live my life in fear.”

Unknown to my mother, I  changed a few things about my running routine.   I’m always very aware of my surroundings no matter what I’m doing and due to the blessing of my hearing impairment, I see things and feel things around me that most people wouldn’t notice.  I started packing a knife;  taping the knife to the inside of my wrist and I was prepared to use it should  someone try to drag me into a car, or pull me into the bushes.  I believed the knife gave me a fighting chance to get away from a perpetrator should I find myself in a position where I  was forced to defend myself.

This particular morning as I was running, I kept rubbing my hand over the knife on my wrist because I was feeling uneasy. My head was starting to clear and the uneasiness was starting to settle when I saw some movement in a bush.  My body went into defensive mode and I pushed all my weight forward ready for anything coming my way.  When I reached the bush, a man stepped out wearing dark clothing and what appeared to be a hoodie.  He stepped right into my space and before he had a chance to do anything, I hit him with two hands square in the chest and sent him flying backwards into the bush.  I kept running and when I felt I was at a safe distance, I looked back and to my horror  I saw a bus approaching the bus stop and the man trying to get up  to catch the bus.  When he stood, he was wearing a dark trench coat and some kind of hat and I realized he was just a guy trying to go to work.  That man is probably telling his grandchildren the story to this day of the psychotic woman who attacked him while he was waiting for the bus.  I felt terrible but I assessed the situation as danger and I acted in self-defense.  It is good to have fear and fear can protect you, but fear can put a lot of pressure on the brain causing you to over-react.

Now thirty years later, exercise is still very much a big part of my life.   Recently, I had to give up running because of some serious back issues, and I’ve replaced the running with walking.   My husband and I adopted a beautiful black shepherd named Kaos and I guess you can say he has become the knife that walks by my side.  I walk him for hours at a time and quite often I am walking him in the blackness of the night.  When I married my husband, he echoed my mother’s warnings as he was always telling me how much he did not like me running in the dark and like I told my mother, I told him the same “I won’t let fear stop me from doing what I love.”

Once I started running with Kaos, I noticed that my husband stopped warning me about the dangers.   When I mentioned this to him, he said “I don’t have to worry about you with Kaos, that dog loves you and he will go through a wall for you.”  Kaos is big and he is strong but I wasn’t convinced that in a physical attack he would do anything.  For all I knew he was a complete wimp and I was on my own.

We are a busy family with two boys playing sports and both my husband and I work full time, so one night I didn’t get Kaos out for a walk until ten o’clock.  Half way through our walk, I noticed a man about forty feet out and I felt a tingle down the back of my neck and the uneasy feeling of danger settled deep into my bones.  Again, I became very tense and my muscles tightened as I prepared my body for possible battle.  This time I had the Kaos man with me and I let him have full length of the leash so he could protect me from the front.  Kaos is as black as the night and I don’t think the man saw him.  The man’s gaze was on me and when he got to the side of me, he stepped directly into my space,  yelled in my face and put his arms out to grab me.  I was ready, my knee was already about to meet his crotch when Kaos stood up on his hind legs, growling  with his huge teeth protruding from his jaw.  There was a split second where all three of us were suspended in time and then Kaos leaned in for the attack.  The man jumped back so fast he fell back onto the ground and I made sure I gave Kaos enough lead so the man could smell Kaos’ breath.  He was screaming at me to get my dog off of him and I let Kaos linger in his space so the man knew who he was messing with and I told him I would let my dog go if he moved an inch.

Kaos had my back and when all was over my husband was not at all surprised.  He watched Kaos around me, noticing the bond between Kaos and I, and he knew Kaos would protect me at all cost.   Kaos makes me feel more secure than a knife taped to my wrist and affirms that the relationship between animal and human is instinctive and goes beyond what most people are willing to give these animals credit for. Now I have the blackness of the night beside me every day when I hit the streets and I feel protected in his love and dedication.