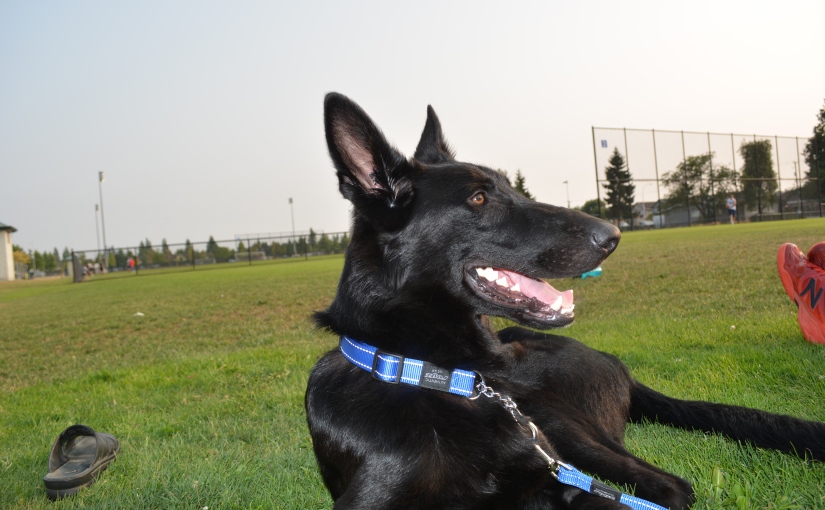 “Dogs do speak, but only to those who know how to listen.” Orhan Pamuk, My Name is Red.

It’s been 8 months since I adopted a new member into our family. A big black shepherd named Kaos. It has been a long time since I’ve had a dog in my life, I put off adopting a dog because I was busy with my boys, work, home and a host of other reasons why I didn’t adopt a dog before now. The longer I went without a dog in my life, the more I had forgotten how much joy these beautiful beings bring to ones’ life.

I adopted Kaos from the SPCA and he had been neglected and abused. He was 25 pounds underweight and he suffered from extremely high anxieties. He is a big boy so I immediately started to work with him by feeding him well and getting his weight back to a healthy state, training him to walk properly on a leash and dealing with his anxieties. When we adopted Kaos I was home from work on holidays. Three weeks after I adopted him and the first day back to work, Kaos tried to stop me from leaving the house by grabbing my pant legs with his mouth and pulling me back into the house. When that didn’t work he tried blocking the front door to stop me from leaving. My husband phoned me at work to tell me that Kaos had been lying at the door for several hours howling and crying. He was so worried I wasn’t coming back,  so after that experience I worked with him by leaving for a short time, came back, leaving again for a short time came back, leaving a little longer, longer until he realized that “yes she’s leaving and yes she’s coming back.”

He is a smart cookie so he was somewhat easy to train but he had one problem that I could not deal with; leash aggression. Every time I took him for a walk and he saw another dog, he lost his mind. The leash aggression was so bad that he almost pulled me into on-coming traffic one night. After that close call I bought a pinch collar. I hated to do it but I needed more control because as his weight, health and anxiety issues improved , he got stronger and stronger. The pinch collars pinch into the dog’s neck and creates an uncomfortable pressure giving the handler more control. This seemed to work for a short while but as time went on, Kaos became more and more aggressive while on the leash. So aggressive, one night another brave soul walked his dog close to mine and Kaos tried to attack the gentleman’s dog. Took everything I had to hold him off. I was so exhausted that night when I finally got home with Kaos – exhausted and depleted – my thoughts were “I just can’t do this any more.”

Kaos baffled me, he was like the dog ambassador in the dog parks but on a leash he was a complete lunatic and there was no doubt in my mind, his aggression was getting out of control. When I was a younger woman I rode horses and I can remember one summer, this particular horse took a disliking to me and was always trying to find a way to get me off his back. One day during lessons as we were doing our exercises, my horse turned to the middle of the group and started running out of control and jumping like he was doing some kind of rodeo trick. I was thrown clear and landed on my ass. I remember feeling bruised and embarrassed as I lied on the ground staring up at the ceiling of the huge barn. I was furious, found my composure, lifted myself out of the dirt and walked over to the horse, furiously took the reigns and climbed right back on. The horse tried to throw me off again but I wouldn’t hear of it. I never had trouble with that horse again. That memory came back to me as I was dealing with Kaos and with that memory came this question “if I could get control over a 900 pound horse, why the hell could I not get control over a 90 pound dog?”

Realizing that I had tried everything and given everything I had, I called a dog trainer. Her name is Shauna and interesting enough I found out about Shauna when I least expected it. I was in a dog store buying a bone for Kaos when I had a casual conversation with the girl at the cash. I told her about my Kaos having leash aggression and she gave me Shauna’s number. I called Shauna but we couldn’t seem to get our schedules together. Time went on and I just dealt with the Kaos and at times he got better but overall his aggression had become incredibly intense.   Another trip to a different dog store months after I first heard of Shauna’s name, I had another casual conversation with the store owner. After describing my Kaos, this woman said to me you must call this trainer, her name is Shauna. I said “Shauna Olson”, yeah “how did you know” said the shop owner. I believe in messages from the universe and losing her number only to run into someone else who spoke so highly of Shauna meant that it was Kaos’ destiny to meet Shauna.

Our first session was private and then I booked ten group sessions and the Kaos man and I have so far completed five group sessions. I now can walk past dogs and he may growl a little but no more losing his mind, I have complete control. Shauna confirmed what I already knew, I was the problem. Never having a dog with leash aggression and not having the tools or techniques to deal with it I was making my dog crazy. The pinch collar, even though the collar gave me control, was a mistake. Every walk I took with Kaos and I saw a dog coming, I tensed and as I tensed I was sending Kaos the message that I was not in control, and feeling out of control Kaos was doing only what he knows best, he was protecting me! Adding the pinch collar to that situation only created frustration and anger and that is why his aggression became so intense  instead of getting better. If I had been listening and connecting with Kaos properly, I would have been able to take control of the situation. His size and sheer aggression just added stress to our walks as I was very tense and concerned that he would attack and he did attack another dog.   Thankfully the pinch collar allowed me to gain some control over that situation.   Now I have control by giving Kaos direct instructions, letting him know what I expect from him when a dog comes our way by repeating the same command and when he doesn’t listen to my command I have discipline techniques I use to gain control.  All of this work is assuring Kaos that I’ve got it, I’ve got everything under control and he doesn’t need to protect me. The result is peaceful walks, and increased bonding with Kaos, just the way I envisioned our life together..