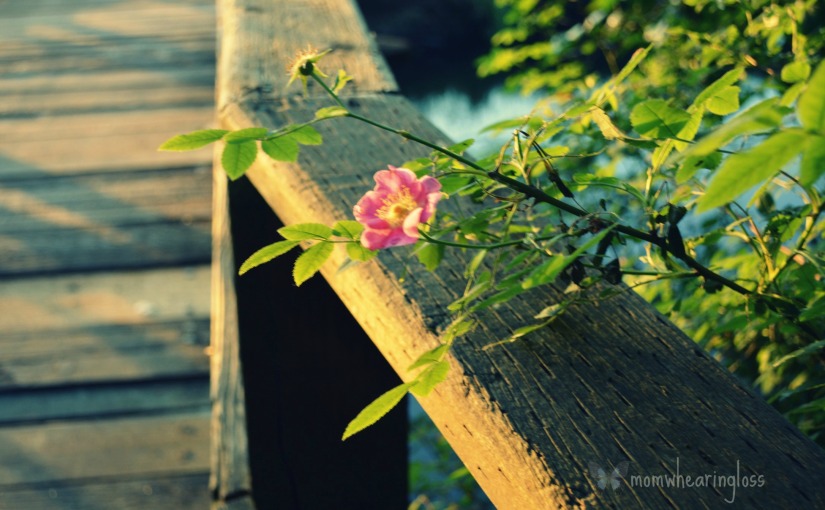 My earliest memory of my obsession with objects from the past, was a trunk I found in my mother’s basement. The travelling trunk had come with my grandparents when they travelled across the Atlantic from Ireland to Canada many years before. The trunk had a big lock on the front and wooden slats that ran horizontally around the trunk. What looked like straps of black leather, ran vertically from the top of the trunk to the bottom. When you lifted the top of the trunk and looked inside there were compartments that held pockets that you could lift out creating layers for all of your personal belongings allowing our ancestors to pack virtually their entire lives in that trunk. I imagined my grandmother had a good dress, a working dress, a few hats, gloves, linens, silverware, maybe some dishes and not much else. I was fascinated with the trunk as a young girl and obsessively opened it and pulled it apart only to put it back together again imagining I was fleeing some hopeless situation.

Moving my hands across the top and the sides of the trunk, I would close my eyes and see if I could get a sense of my grandparents as a young man and woman fleeing poor conditions in Ireland and coming to Canada on a boat with the hope of finding a job and settling in a new country. I can’t even imagine but as I ran my hand over the trunk feeling the bumps, grooves and the ruggedness of the time, I was able to feel fear and uncertainty, yet hope and promise at the same time.

My grandparents settled with many other Irish descendants in Montreal, Quebec and there my grandfather settled into labour jobs and worked hard to support his eventual family of three boys and five girls. Two of the children were twins and unfortunately, one of the boys died at the young age of 18 months of scarlet fever. My Irish grandfather was a staunch, bold and stubborn man and from what I understand from my mother he was difficult to live with, thought nothing of throwing the girls’ boyfriends down the stairs if he thought they were disrespectful. Yet while raising his young family, there were times there wasn’t enough food in the house to feed all, he would go to his labour job without food to make sure there was enough food to feed his children.

They were poor, my mother remembers part of her weekly routine was standing in bread lines. My mother recounted how a Christian group at the local Catholic church dropped by with poor boxes for Christmas, my grandfather took exception to the fact that a gift of a sled for one of his children, included with this box, was full of dog shit and in poor condition. He took that sled and walked up to the local church and gave the Pastor hell for allowing his church to give children such poor gifts and my grandfather wanted to know if most of the children in that Pastor’s church received toys in such poor condition covered with dog shit. My grandfather insisted that what was good enough for the children of his parish he expected for his children and threw the sled at him and walked home. He was a proud man, there was no doubt about that and from my earliest memories of my grandfather, I remember his proudness.

Interesting, he was a story teller. Something I don’t remember very well, but my older siblings remember and when he came over for family dinners, he would gather all the children around him and tell stories of how the dead came to life at wakes and many other harrowing stories that scared all the children, yet my siblings assure me that they loved his stories and loved being around him. The trunk was my first encounter with my grandparents’ earlier life, a life before any of us, a time when all they had was each other and the contents of that trunk. Digging through the trunk and inhaling the scent of the time, I realized that I was born from that trunk, the trunk of hopes and dreams of a better life was a symbol of the empire my grandparents built of families with their own hopes and dreams of a better life. 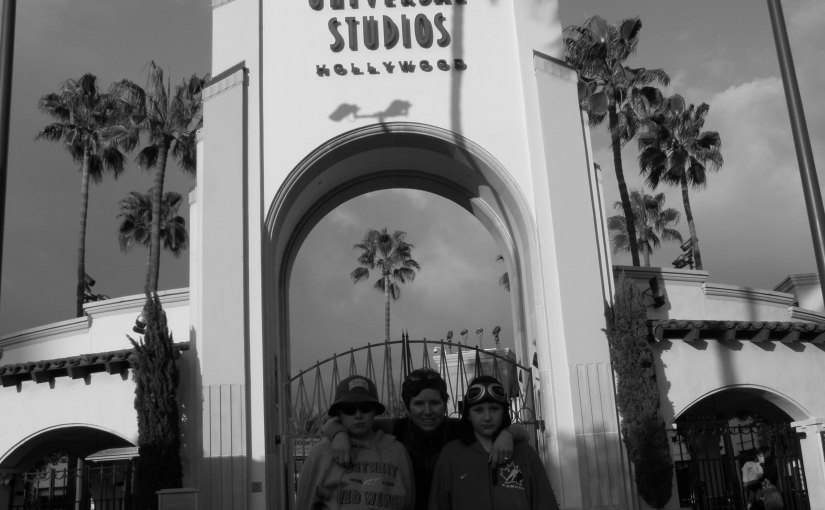 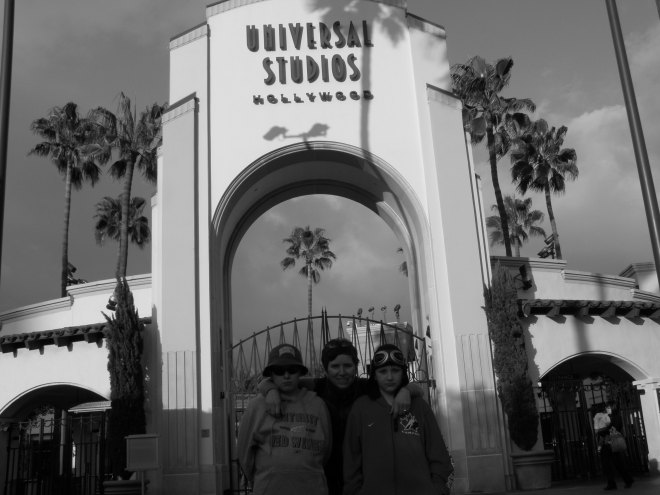 After three days in Disneyland (can you say Mickey Mouse), my husband and I were ready for something different.  Before heading to California I pre-booked a 4 day pass to Disneyland and a one day pass to Universal Studios.   We lost one day because of car problems in San Francisco and our hotel reservations were up in Anaheim.  We decided to spend the day at Universal Studios and then head to Arizona and Nevada to see the Grand Canyon, good old Las Vegas and back to Anaheim for one day on our way back home.  I’ve never been to Universal Studios before and I had no expectations.  The studio is approximately 35 or 40 miles from Anaheim but it took us forever to get there – there’s never a quick or easy route when driving in LA.  So here we are at Universal Studios.  I really enjoyed the park, more than I thought I would.  We took the studio tour,  you can’t possibly go to Universal Studios without taking the tour.  There’s plenty to do in the park but we couldn’t do everything in one day, especially since we wanted to head back to our hotel before the traffic was out of control.  The Jurassic park ride looked awesome but my youngest did not want to go on it, said it looked to S-C-A-R-Y.  We opted out for the studio tours and Shrek 4- 3D.  We saw Shrek 4 – 3D first and it was very cool  – kids loved it.   The studio tours were a blast, I really enjoyed all the effects.  You can check all the fun below by double clicking on one of the pictures in the gallery: 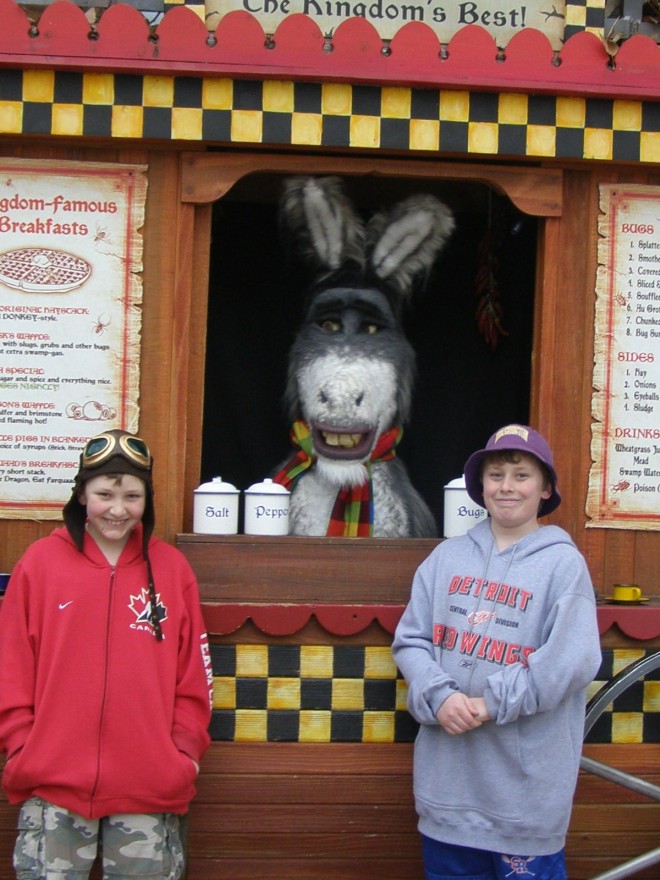 While in California Park, I bought my youngest son the flight hat and goggles you see him wearing consistently throughout these pictures.  Donkey from Shrek, as seen here, was priceless.  He kept saying to my son – “What kind-a pilot are you, where’s your plane?”  “You can’t call yourself a pilot, you got no plane.”  Had my son in stitches as you can tell by this picture.

We saw plane crashes, a flash flood, old western town,Norman Bates, Whoville, Desperate Housewives, Jaws, Jurassic Park, exploding cars and so much more.   All very entertaining and worth the price tag.  My batteries died in my camera but we toured through some of the housing where the actors in the 50’s use to live while they were filming.  Old 50’s bungalows, actors were kept there during filming – during the era when the studio controlled every aspect of the actors lives.  Next post I bring you the Grand Canyon….

After our travels through Oregon and Yreka California, we arrived in San Francisco.  GPS is such an incredible invention – just plug in where you want to go and it takes you there.  One problem, sometimes it takes you on routes that aren’t exactly the best way.  We wanted to cross Golden Gate Bridge but ended up going over Oakland Bay Bridge.  Not a good choice as we ended up in a parking lot, literally.  I could not get over the amount of cars going over that bridge.   I felt like this tiny ant trying to get through the entire colony only to find space where I could lay my head down.  To add to the stress, our car was giving us problems and we were worried the car would die right there in the middle of that insane traffic!  I pre-booked our hotel in San Mateo, a little place called Stone Villa.  The place was decent, clean and cheap as we were only supposed to stay one night and move on to Disneyland. If you’re looking for a place with a view this is not your hotel as the hotel faces an industrial area.  We arrived in San Mateo on a Saturday with car problems and decided that we wouldn’t head to Disneyland without getting the car checked out.  Unbelievable  to me that in a city the size of San Francisco there were no mechanics working Sunday .  We were stuck without a car in San Mateo!  Rather than waste the day we took public transportation to the heart of San Francisco and spent the day at Fisherman’s Wharf.  It was a wonderful day and we saw so much and talked to so many local people because we used public transportation.  Doubt we would have seen that much in our car.  Next day our car was fixed and we were on our way to see Mickey Mouse.  Here’s a few shots of our day in San Fran, I absolutely loved San Francisco and want to go back and spend a few more days.  Double click on one of the shots in the gallery below to see a close-up view!

Waiting for the bus to San Francisco – notice the boys and my husband are wearing team Canada hats and T’s.  Remember we were visiting the USA during the Olympics – just had to show our patriotism!